About a month ago lovely Jess, the author of a great travel blog Tripelio and a passionate traveler who had a chance to live in China and explore this fascinating country, suggested to share with our readers her 7 Essential Tips For Traveling To China. We only wish we knew these insider tips last year, when we went to Beijing and faced a few challenges, such as not being able to access our blog, because we didn’t know how to use the VPN, or not knowing how harsh we should haggle with the cunning Chinese merchants.

Of course we were more than happy to welcome Jess as a guest on our blog Vienna Insider, because we enjoy sharing insider and travel stories with you guys! We are sure that you will find this informative article very helpful, and are also hoping that you will enjoy our pictures. 🙂 Selecting and editing pictures for this post brought so many good memories from Beijing. We simply can’t wait to visit China again!

Before we let you enjoy the text, we would like to thank Jess for writing this great article! <3 Don't forget to visit her blog and connect with Jess on Twitter or Facebook.

7 Essential Tips For Traveling To China by Jess

China is a grand, unique and truly spectacular country. After keeping its borders closed to outsiders for much of its history, it has blossomed into one of the greatest travel destinations that the world has to offer. Almost 10 million km2 of largely untouched and mostly unexplored country alongside some of the greatest city powerhouses in the world, such as Beijing and Shanghai, there are uncountable reasons why China should be on your travel bucket list.
However, part of the allure-China’s individuality-is also one of the main causes for travel disasters in the country. After going there and experiencing the incredible culture for myself, there were definitely a few things I wish someone had told me before I set off. Fortunately, we’ve compiled a list of seven essential travel tips to know before your adventure, so you don’t have to make the same mistakes.

1. Not All Internet is Equal

If you’re going to China, and you want to access the internet, then you’re going to need a Virtual Private Network (VPN). I got my VPN through a VPN recommendation so ask around to see what the best options for you are. Unfortunately, censorship in China is still an extremely prolific issue and restrictions on the internet are some of the strictest in the world. Most popular social media sites, such as Facebook, Twitter, YouTube, etc. are banned, alongside major search engines such as Google and many of its add-on packages. Additionally, if you are working from China on a work trip, you might not be able to access the same things you would at home in the office. Before you travel, make sure to visit many VPN review websites, such as the IPVanish VPN Review sites, to give yourself an idea of what you will need. There’s also specific blacklisting on many search terms, such as “Tiananmen Square Massacre” or anything that paints the Communist party in a less than perfect light. Fortunately, by using a VPN you can trick the internet into thinking you’re located in a different country and will be free to browse without any restrictions. 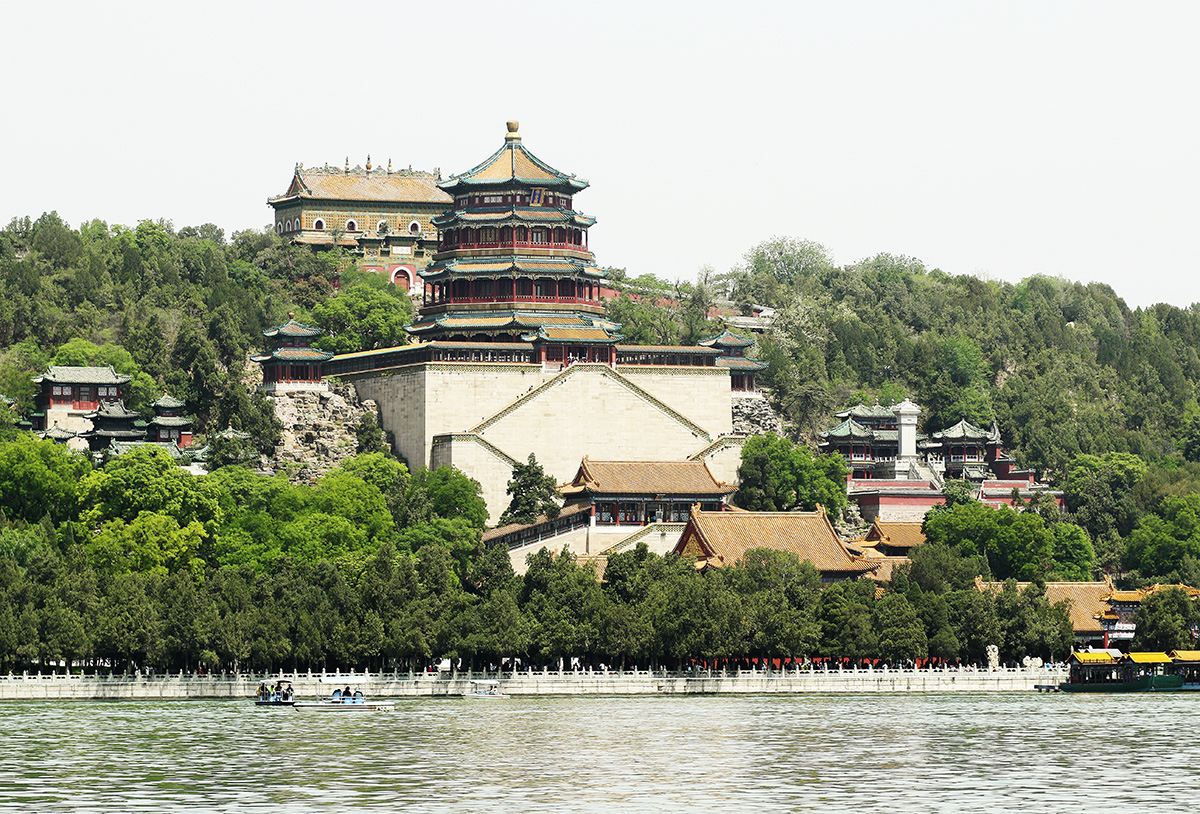 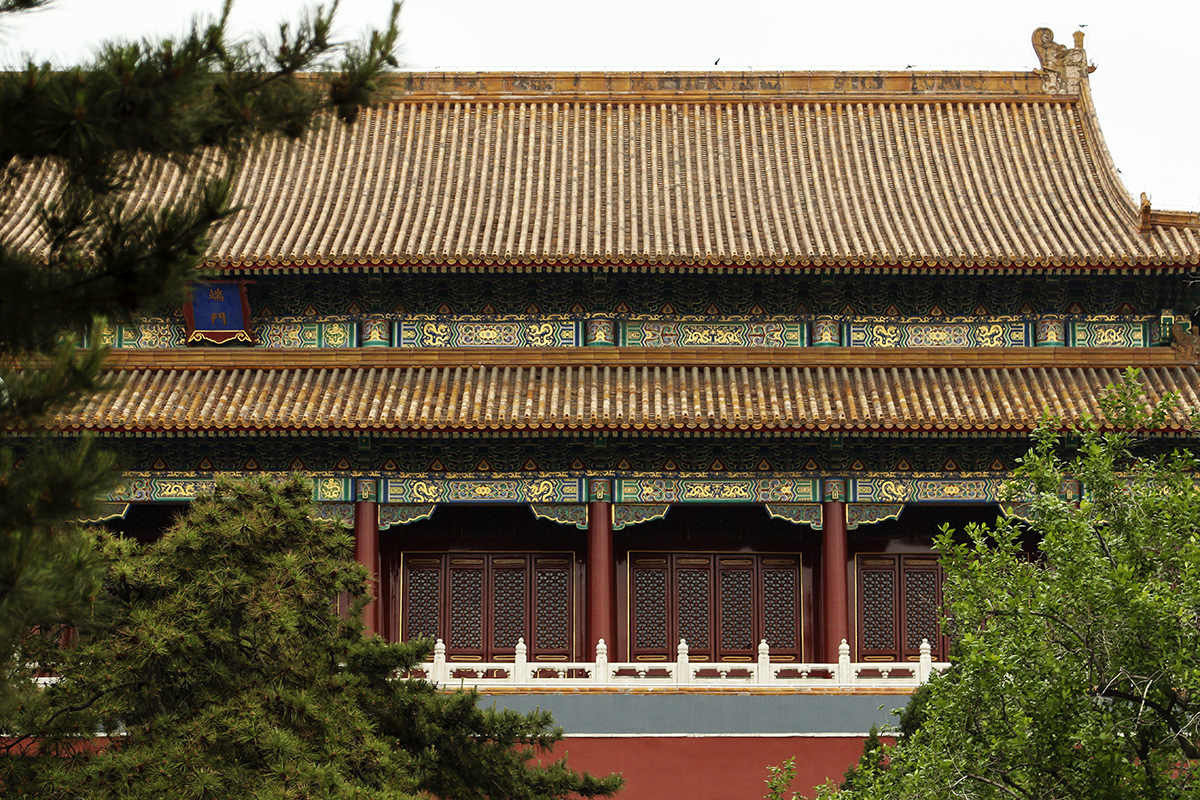 2. Get into the Country

One of the most important things to consider when traveling to China is your visa. Unlike most countries, visas are not purchasable on arrival. This means that for spontaneous, long time travelers, turning up on the doorstep one day is not an option! Although visas can be easily purchased online, many suggest that cheapest way to do it is to stop by Hong Kong and buy it from a visa office there. Doing this could save you about 75 percent of the online price, which is a notable difference. Applying for a visa also requires a bit more than for most countries. You need a full itinerary of your time in China, including the places you’re staying and how you’re traveling, alongside an additional passport photo and, of course, the obvious documents such as your passport. 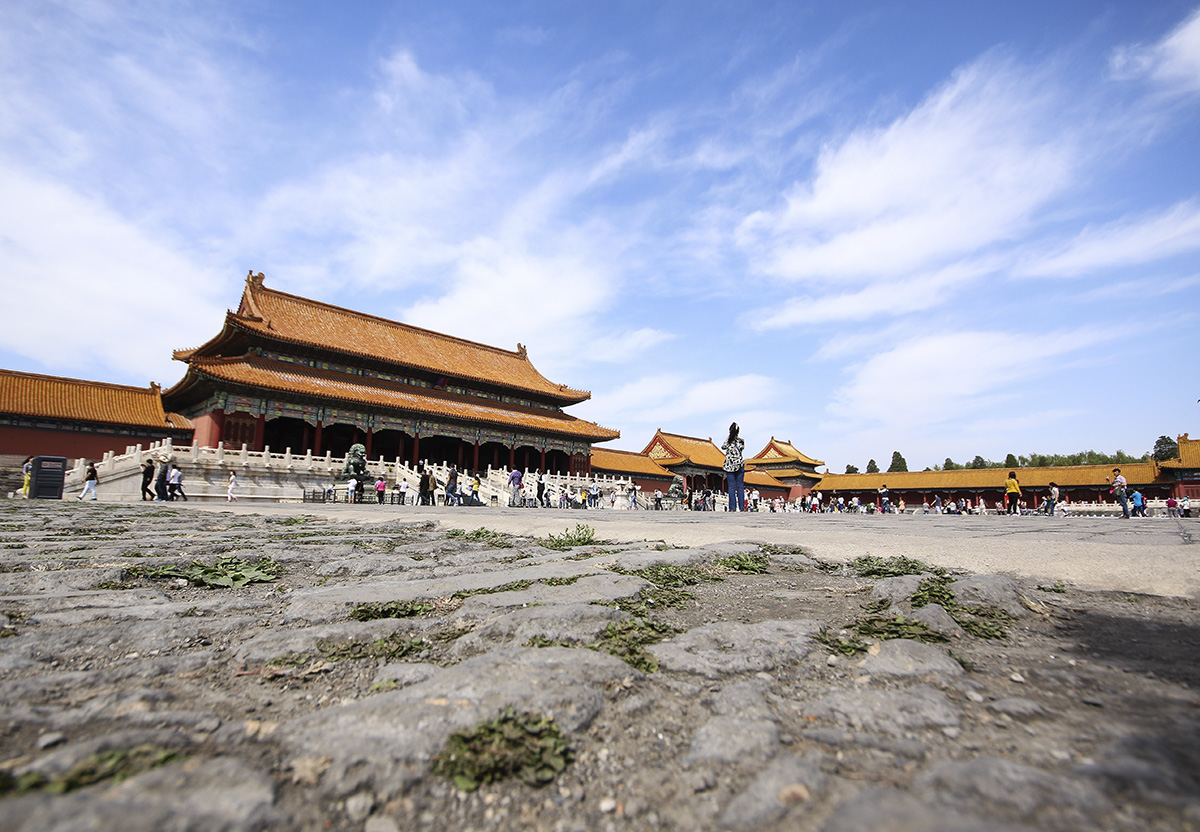 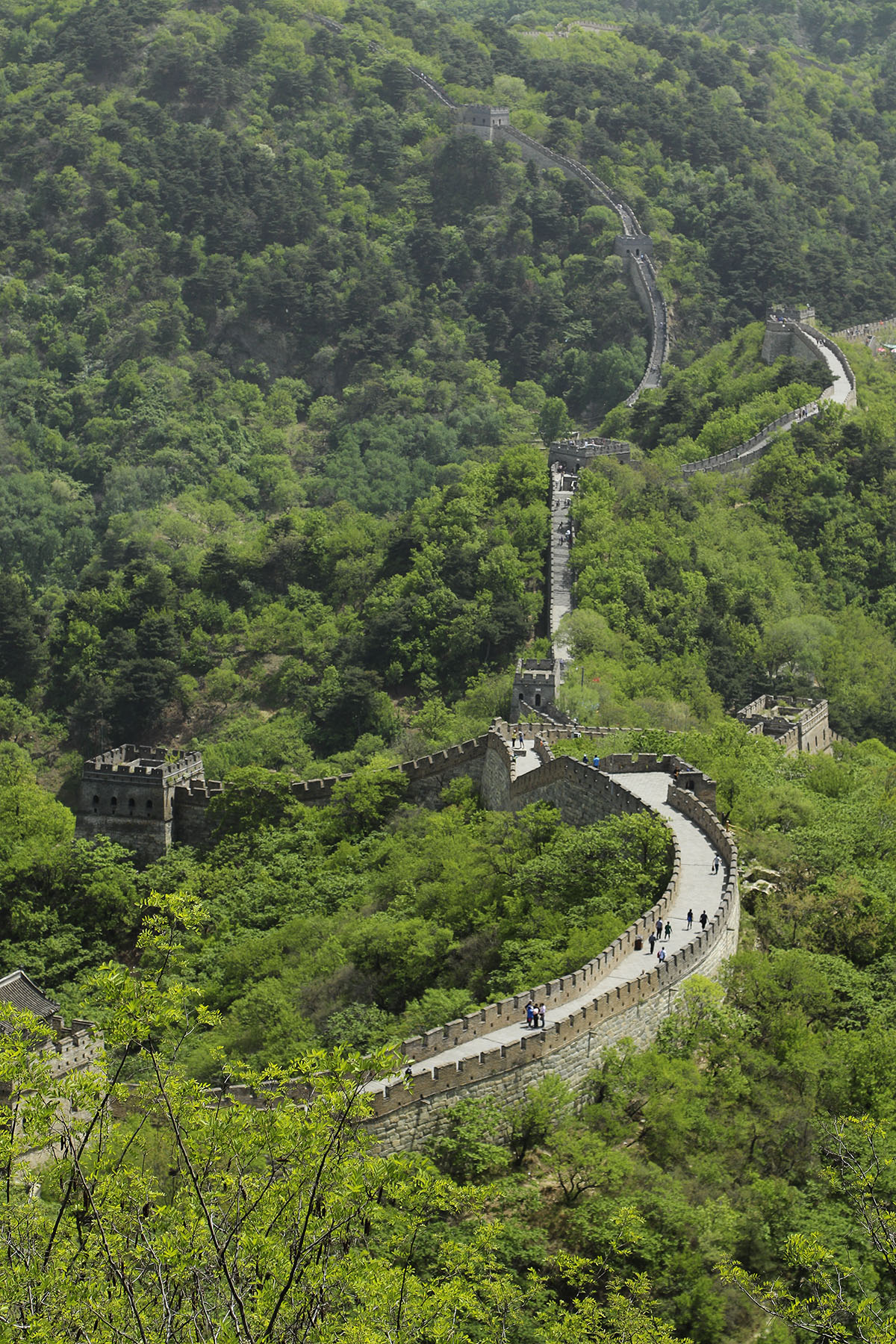 Experience of a lifetime – walking around the Great Wall

For the rest of the world, China’s political system has been one of controversy and corruption. However, believe of not, the Chinese probably don’t think of it that way. Although, interestingly, it’s unofficially a Communist country-it’s simply thought of that way as the leading party is Communist-the government does all they can to instill faith and belief from their citizens. This goes as far as heavily censoring the internet and news sources for their benefit, and it’s even the reason the Tiananmen Square Massacre occurred. Protests broke out after populist liberal politician General Secretary Hu Yaobang was killed. So, although you might have a plethora of opinions that you’re dying to share with citizens to help make the country a better place, it’s probably best to keep your views to yourself. 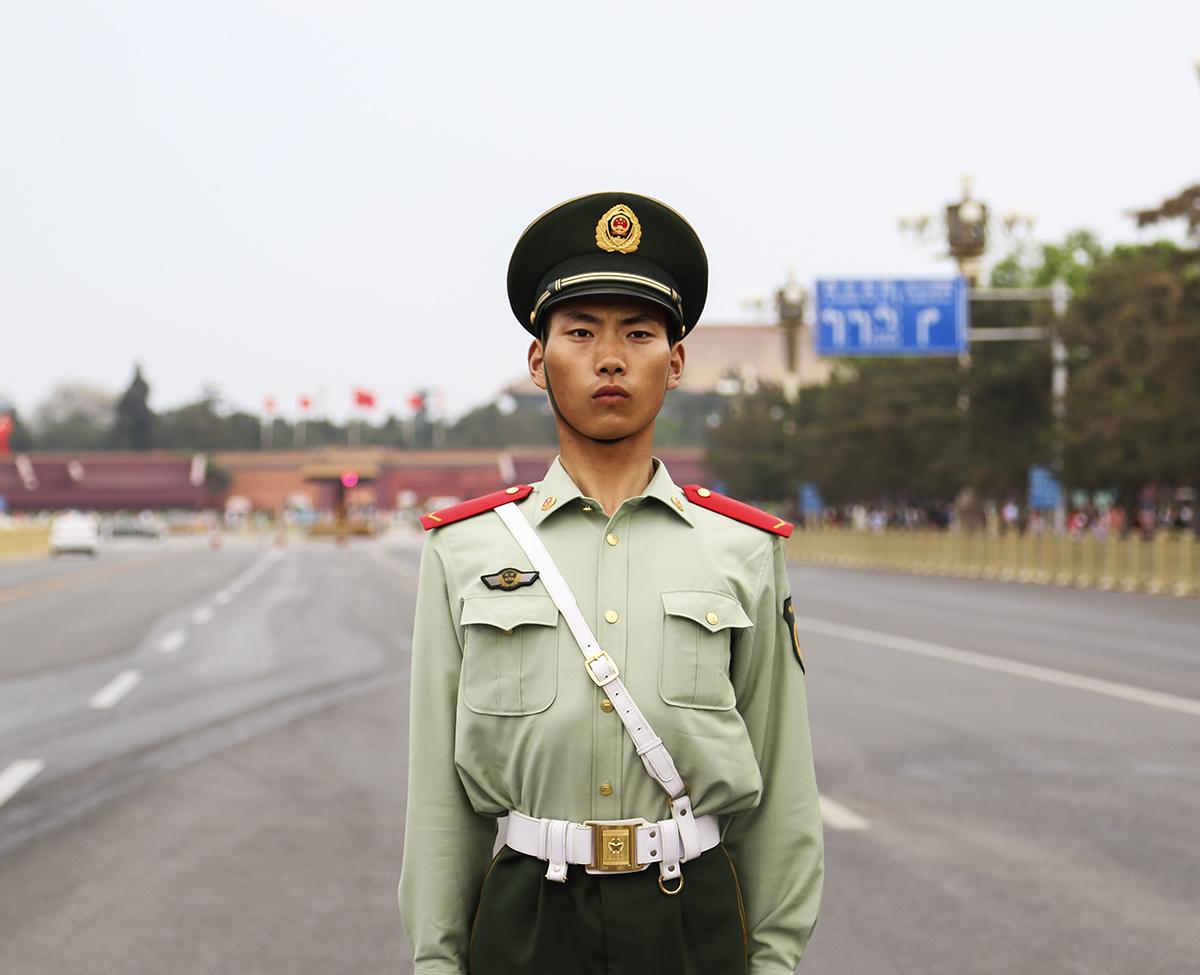 Chinese solider on the parade on 1st of May 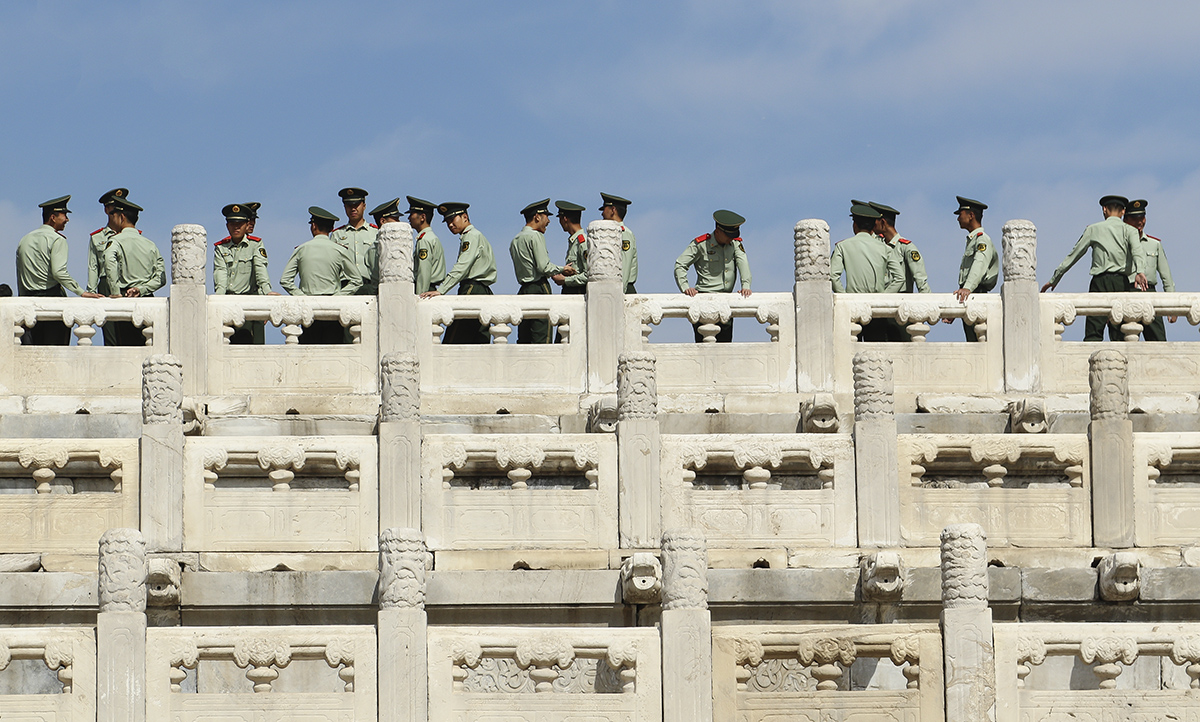 Chances are, any visitor to China is going to have had Chinese takeout at least once or twice in their life. However, actual Chinese food could no be further away from that experience. The food that is regularly served is much saltier and more savory that its western counterpart. Similarly, particularly with home cooking, authentic dishes tend to be much more vegetable focused, with meat being a rare and occasional treat.
However, when it does come to meat, there are some interesting choices on the menu. Although eating cats and dogs is diminishing in popularity, they are still available in some places, and chickens feet and deep fried insects are still a popular street food choice. If you’re brave, then there’s an entire exciting and delicious cuisine, ready for the tasting. If not, classics, such as Peking duck, are pretty much the same no matter where in the world you are. 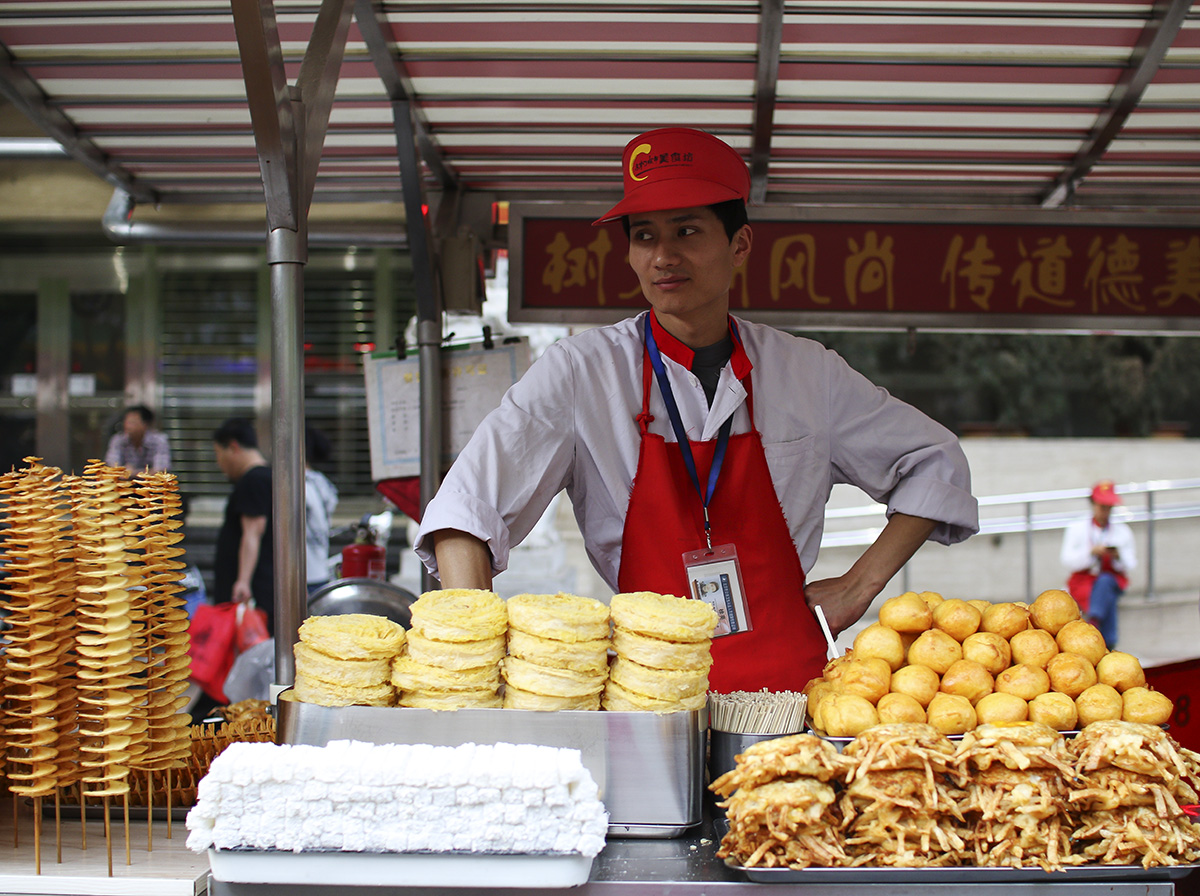 A little bit of street food 🙂 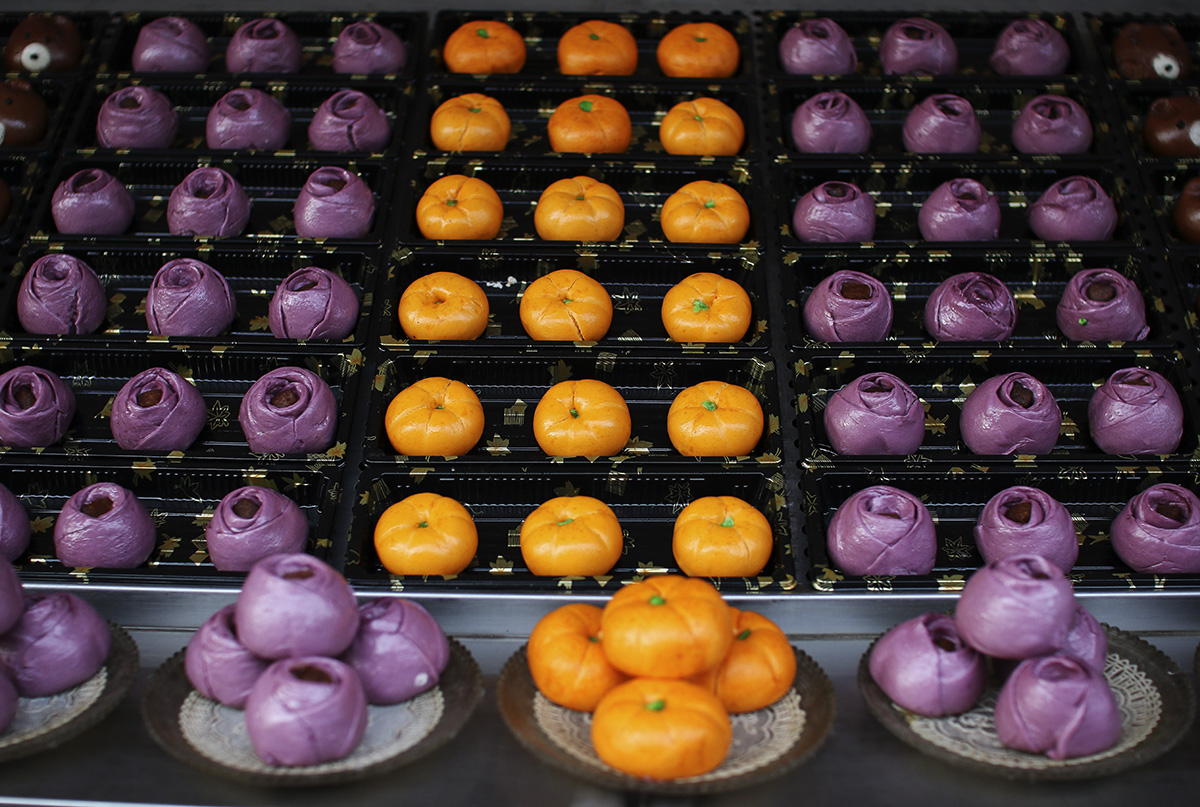 Knowing whether to haggle or not is an important part of traveling wherever you go. Some places, you’ll get seriously ripped off if you don’t even try; however, on the flip side, many merchants find it extremely rude if you attempt to undercut them in a place where it’s not appropriate. Fortunately, China is definitely the former of these two options.
As a general rule, shopkeepers will make an initial offer of a whole ten times greater than its actual price. If you’re unsure, it’s always a sensible to get a good idea of the retail value from people you know or even by asking others on the street before attempting to make a purchase. Conversely, taxi charges should never be up for debate. If there is not a clear meter when you enter to vehicle, get the driver to write down the price before you set off. 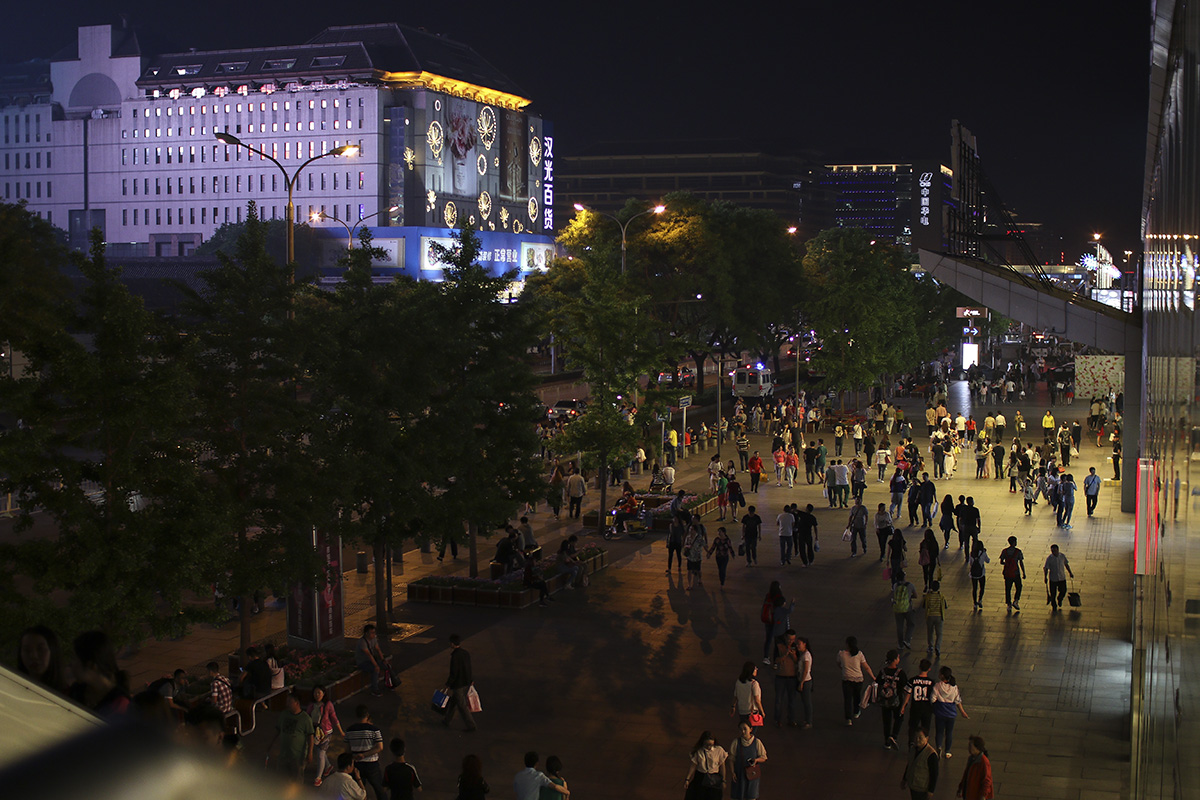 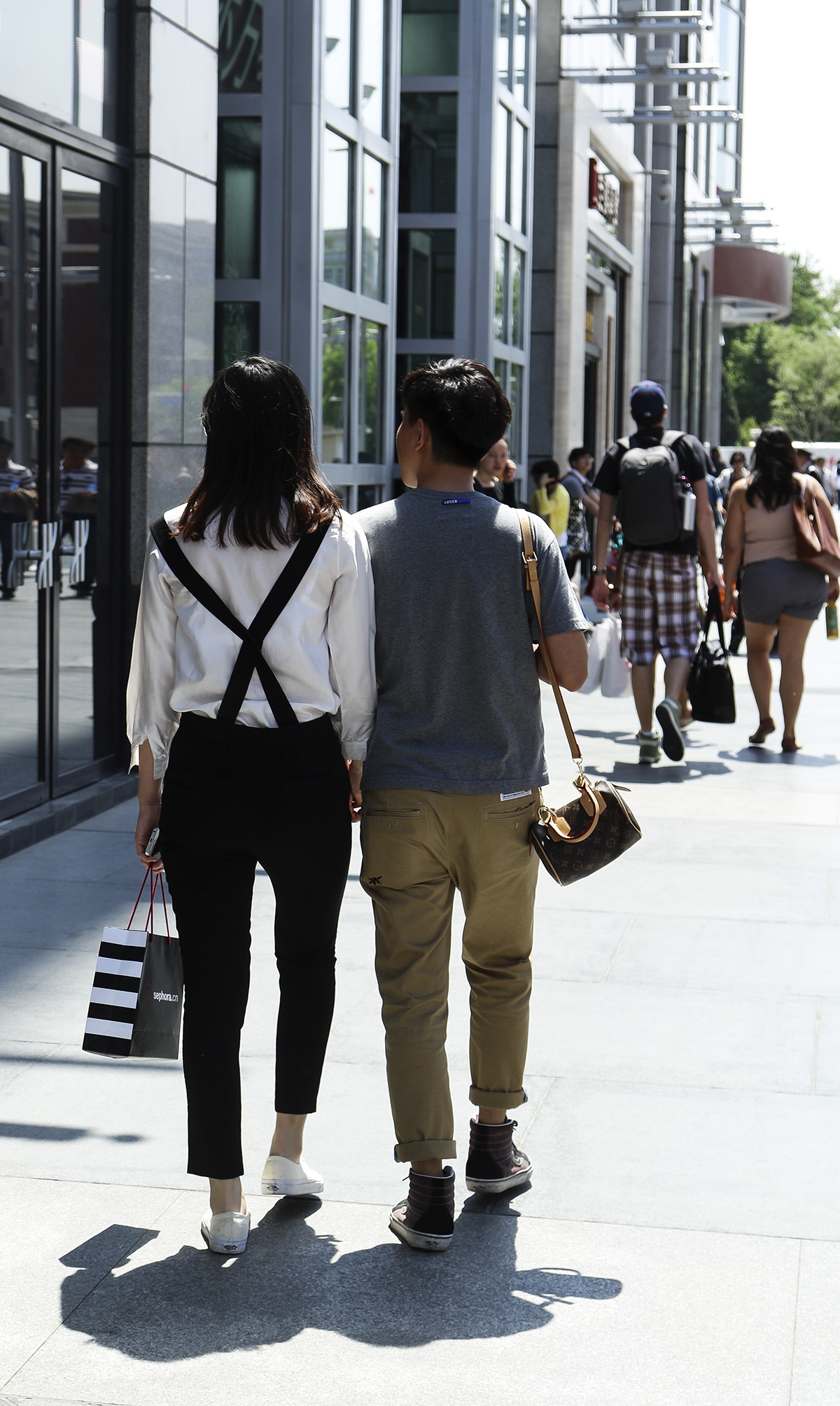 There is definitely still a language barrier in China. Although many people now speak English, particularly in big cities and business sectors, there is still the vast majority of the population who can’t, or won’t. Similarly, the variation in characters means that deciphering things by yourself isn’t really a good option.
Fortunately, if you try and learn a few simple phrases, it’ll do two things: first, it will allow you to get your head around the structure of the language and letters, and second, it will fill the recipient with immediate joy to see you having a go. There are five main spoken dialects in China, of which Mandarin is the most common, so this is probably the best to learn. You’ll immediately find that people to be more helpful and cooperative than if you go rolling in with loud, brash English. 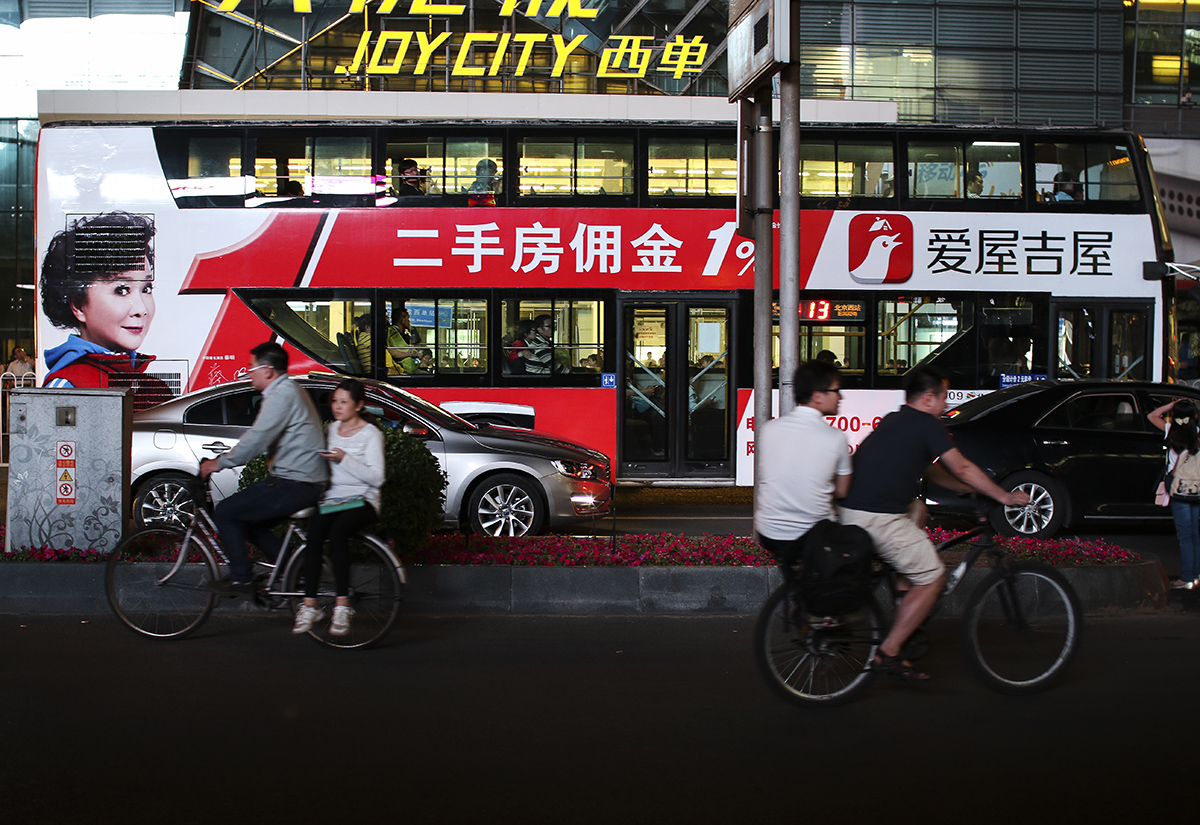 If we only knew what the captions on the buys say! 😀

Every country around the world has its own set of politeness and manners rules. The only difference here is that Chinese etiquette is so different from the western world that it’s extremely easy to put your foot in it without realizing. Unlike in the west, spitting, burping and staring are not considered rude; burping shows satisfaction with a meal and staring is a sign of interest in a subject or person.
On the flip side, public confrontation is an absolute no! The Chinese put a lot of focus on “saving face,” which means avoiding humiliation. Causing someone to lose face is extremely shameful and will cause them a lot of embarrassment. To avoid doing this, never point out if someone is wrong, and if you have a disagreement, be sure to address it in a calm and civil way.

One of my favorite shots from Beijing. Grannies playing cards <3[/caption] Do you have any other tips that you think should be added to the list? Be sure to leave a comment below and share your ideas and experiences! If you would like to find a list of VPNs available to you, you might want to visit somewhere like the best vpn canada to learn more.

About the author: Jess Signet is an avid traveler who is lucky enough to have lived in China and explored this fascinating country. She hopes you’ll find these tips useful and that you’ll enjoy China as much as she has! You can read more from Jess at her blog: www.tripelio.com or find her on Twitter at: @Jessstravels and Facebook.

This site uses Akismet to reduce spam. Learn how your comment data is processed.

This error message is only visible to WordPress admins


Error: API requests are being delayed for this account. New posts will not be retrieved.

Make sure this account has posts available on instagram.com.